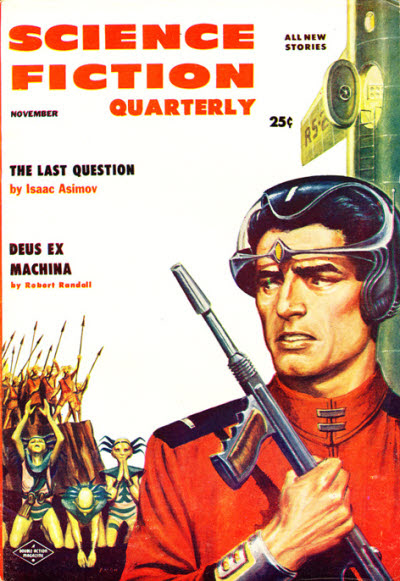 Here are two classic stories people tend to confuse. They even appeared together in the same anthology twice, side by side. Jim Baen wrote:


"I read "Answer" some years after I'd read "The Last Question." My first thought was, "It's the same story!"

That realization made me much less concerned by "originality," because I began to see that nothing was really original, and I became much more concerned about story values. Over the years I've built three SF lines on that principle."

Reading this was a relief because after years of not reading them, I tend to forget which is which although they should more easily distinguished.

Brown's appeared two years earlier and was reprinted shortly thereafter while Asimov's first reprint was sixteen years after its initial appearance. I find it odd that "Answer" did not find a literary home until his collection. It has a classic feel to it, and it's hard to shake it from your mind.

Brown's is focused on the humor/horror of it all. Asimov on the cosmic ineffability. Both ask different questions in the far future but arrive at the same answers, if to different effects. Both resonate long after you've read them.

"Answer" tells of two far future guys who ask if there's a god. "There is now!" Zap! The switch to turn off the computer is fused shut (on/open?).

"The Last Question" is more patient in its unraveling. Over the millennia, as humanity spreads across the universe, people ask can we reverse entropy and start again? The great computer that spans space and time keeps mulling over the question, long after the suns have burned out. Finally, it figures it out and says, "Let there be light!"

Both are rationalist explanations of how a god could be created. Although Brown's is horrified at the possibility (at least, of a computer god), Asimov's is accepting as part of the natural, cosmological continuum.

It looks like the tales will last another generation or two more.
Posted by Trent Walters at 12:00 PM