Review: The History of Soul 2065 by Barbara Krasnoff 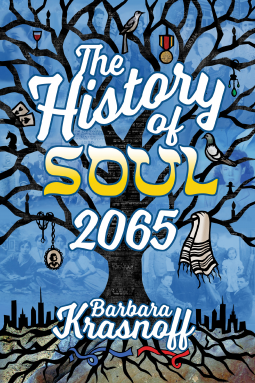 One of the coolest aspects of this book are where the stories first appeared, some of which are professional (but not the major venues), others semi-professional and yet one of them was in the running for a Nebula:

Yet here they are: stories collected between two book covers--a place that commands respect.

One key of the collection is the simplicity of the tales, which is probably good considering their non-traditional structure. They aren't really character stories where someone learns something (although maybe) or where someone should have learned something but didn't or plot stories where a character solves a problem. If any, it's the lattermost, but it pulls deus ex machinas, or solves someone else's problems. You'd think the stories would trip and land flat on their faces. But they don't. Strangely they can be satisfying like sipping hot mocha on a hot day.

Let's take, for an example, the Nebula finalist that Jane Yolen reprinted, "Sabbath Wine." It's the story Malka Hirsch's Dad's struggle to get wine for her bat mitzvah (even though it's for boys, even though the dad is secular, even though something which is the great secret at the end). It's all a MacGuffin, and we don't even start in our protagonist's POV or get his name until the third scene. The story itself is something of a mosaic. The opening scene is something of prologue although it's useful to the story. And I can't tell more without ruining it.

In fact most of these stories don't develop in a normal fashion making them difficult to summarize. Most people are probably scratching their heads why the story made it as far it did.

"The Cancer God" is a pretty good not-exactly-deal-with-the-devil story where Abe is dying of cancer and doesn't want to be. "The Ladder-Back Chair," the second of two stories that Yolen especially liked, is sure to resonate with those who have lost someone near and dear. Joan lost her spouse, Morris, who had been dying by degrees. Interestingly, both of the stories Yolen liked have surprise endings that hinge upon them.

Other stories of note include "The Sad Old Lady"--a tale of young girl who is terrified when she sees herself as she will be when she gets old. "In the Gingerbread House" relates how a cheap pasteboard jewel becomes an instrument to tell stories and save lives. "Time and the Parakeet" is a fantasy time-travel tale where random chance allows someone to make a simple choice that improves one's life for the better. A boy has "An Awfully Big Adventure" when visited by a witch figure--however he's been given numbers that will help. "Rosemary Is for Remembrance" is actually a rare story which does the opposite of the other: It takes something that seems sweet (a trip to the beauty parlor) and renders it horrifying. In "Stoop Ladies" a woman seems to be at the end of her rope until she visits the ladies who gossip on their stoop. "Escape Route" almost worked for me--lovely setup but Krasnoff didn't carry out the ending with her usual magic.

Those are the major stories (about half) that stood out for me. Do they hang together? There's a little bit of a frame story. Two young women meet in the woods and vow to meet again. Chance prevents their reuniting although their descendants do at the end.

The book's description makes a claim of being a mosaic novel, which is said to be a novel of stories that share the same setting or characters. I'm leaning on the term "novel" to build toward some plot, character, or thematic resonance--perhaps all three. One might claim many Dickenson novels as mosaic novels since they are stories that eventually tie together as some of the threads come to have great importance by the novel's end.

I'll throw in a few other terms as well. There's the "fix-up," which is a group of stories that usually follow characters through time but don't often build toward something greater than the individual stories themselves--pleasing as the individual stories may be. This includes a number of Van Vogt fix-up "novels" and some of the Moorcock fix-up novels like Elric. Any episodic adventure like Swift's Gulliver's Travels would fit. Then there are thematic or motif collections like Ray Bradbury's The Martian Chronicles since, although some seem to build toward something, that eventually fades.

Stross's Accelerando is an interesting case. If you consider the developing artificial intelligence as a character, then it's a mosaic novel. If not, then it's part thematic collection, part fix-up.

Where does Krasnoff's The History of Soul 2065 fit along this continuum? If you can tell by the summaries, it's probably closer to thematic/motif collection. Like Bradbury's The Martian Chronicles, plot or character threads do connect the stories, but not across the board. Even the stories, that directly connect via characters appearing in one to die in another, don't rely heavily on what was built up in a previous story. They do hang together in the sense of characters who want to peer beyond the grave or peer into the past, often focusing on the Holocaust. This probably coheres the narratives more strongly than anything else.

What one calls this book may be less important than knowing the overall effect, and for the most part, most Krasnoff stories leave the reader with a little hope and a sweet tenderness, no matter how dismal one's circumstances may be. And that may be all you need to know.
Posted by Trent Walters at 12:00 AM